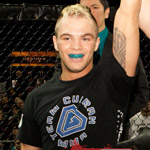 In front of nearly three thousand screaming fans at the Sears Centre, Cory Galloway and Joey Diehl did what they do best: fight. Galloway was part of the amateur triple main event when he took on Pedro Velasco for the XFO featherweight title. Diehl meanwhile continued his winning ways with his victory over Brandon Wood on the pro card.Galloway nearly finished Velasco in the first round with an armbar, but the angel of it was wrong.

Velasco turned the tied on Galloway and nearly submitted him with a reverse triangle choke that had Galloway turning purple. But Galloway stayed calm and collected and listened Jeff Curran give step by step instructions on how to escape the position. Once he was freed, Galloway continued his assault on Velasco till time ran out in the first round. Velasco wanted to put Galloway on his back and work his devastating ground and pound in the second round. He quickly put Galloway on his back again, but this time got a little careless. Galloway locked up an armbar just after the one minute mark and forced Velasco to tap.

Diehl was one of the most popular fighters of the night coming out to a roar of cheers and applause. After his impressive victory at XFO Outdoor War 7 where Diehl suffered a massive cut, Diehl wanted to show he could fight and not get caught.

That’s exactly what he did too. From the opening bell Diehl came out swinging with impressive one-two combos. Wood tried to return the favor, but came up just shy. Diehl seemed to realize a chink in the defense of Wood and swarmed with a big combo. Wood covered up and Diehl was relentless on his attack throwing punch after punch until the ref was forced to stop the action.

The full results of XFO 42 can be found at MMA Recap. (photo by Joey Hill)

About the Author: Mike Cowles